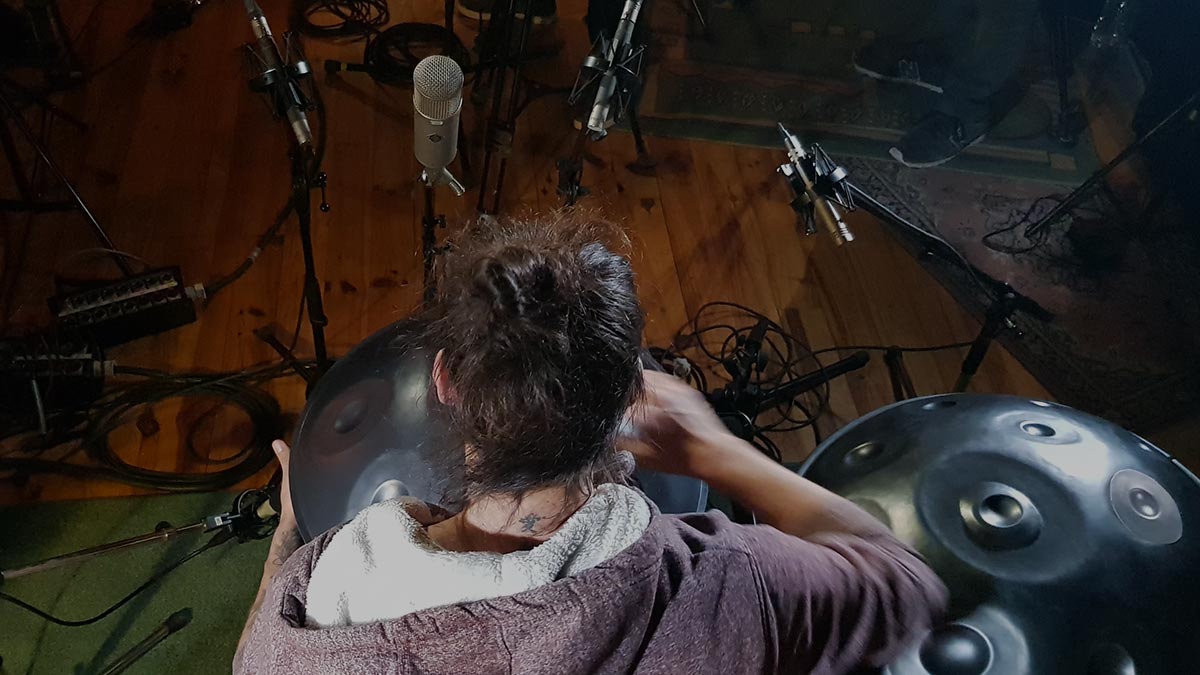 Hi everyone, I’m proud to introduce to you Mr Quentin Kayser! Here’s the interview I had with him... enjoy!

Hi Quentin! It’s great to have you here on MasterTheHandpan, I’ll let you introduce yourself...

Hi David, thanks for inviting me into your living room, your whisky is delicious...So, I’m Quentin Kayser, that’s my real surname and I’m nothing like Keyser Söze from ‘The Usual Suspects’.

When I was 3 years old my mum rented a house in the countryside near to Toulouse in which, to her great delight, the owners had left a piano. That piano became the world’s best babysitter, I would sit and play it all day. Since then, not a day goes by that I don’t play music.

Can you tell us about your newly-released album ‘Healing’?

Of course, but first I’d like to thank everyone who contributed to the crowdfunding campaign that got the project off the ground. Many of them are MTH readers and students so I’d like to take this opportunity to say a massive thanks!

‘HEALING’ is a solo handpan album. It’s actually my second album but the first to be recorded professionally, complete with barcode on the back. This album has 13 compositions and 1 interlude, I’ve always wanted to include an interlude in an album.

The inspiration for my compositions comes from my years living abroad and my travels around France and throughout the world. Each one tells a story or describes feelings and emotions based around these different experiences. I take you to Mexico with ‘Temazcal’, to Nepal with ‘Annapurna’ to Nepal and to 10 days of solitude with ‘Vipassana’.

‍I have two reasons that come together to explain this title. In March 2018 I was in the city of Nîmes and someone who had never seen a handpan before started crying when I played for them. I remember very clearly how this felt at the time and attempted to translate this feeling through an improvised melody. I instantly had a feeling of energy and healing. This became the first few notes of track 3 entitled ‘Healing’.

The second reason comes from the intention behind this project. I believe that a song that comes from the heart, that is shared with love and listened to attentively has the power to touch the soul of the listener. The message of the album became clear and so the title ‘Healing’ made perfect sense.

What instruments do you play on the album?‍

On the album I play handpans from 4 different makers, all friends of mine who I would like to thank for their hard work…

What’s your favourite track off the album and why?

Haha! I would like to ask you the same question!

Actually, I don’t have a favourite, I tried to envisage the album as a whole. Above all else I write music to feel good, so if I decide to share my compositions it’s because I reckon they will help someone else feel good too. However, I did record 5 other tracks in the studio that didn’t make it to the album because I didn’t feel they fit with the whole concept.

Do you have a particular method you use when composing?

Yes. In the morning, before I have a coffee, I pick up my instrument and try to play a few notes and rhythms that I haven’t played before. If I like the result, it will become the basis for a future composition. Oh, and very importantly, I never record myself; if I forget the melody, too bad. I stick with the melodies that stay with me naturally and that I can play again almost instinctively.

The rest of the time spent composing generally entails playing the same small section for hours until I feel happy with it and can start to add in other things.

‍At MasterTheHandpan we like talking recording kit :) What equipment did you use?

Well I personally didn’t record anything, it was all the work of Alexandre Chaigne, genius sound recorder of the handpan, sound engineer on the album and the mastermind behind all the technical aspects of this project. Take a look at his Facebook page and his website to check out the work he does and the services he offers (recording, mixing).

When are your next performance dates?

I’ll be playing in Lyon on 19 April at KoToPo, 11 May in Paris for the 7th anniversary of RDV du Hang, 17 May in La Tranche-sur-Mer, 18 May in Poitiers, 9 June at Handpanala festival in Alsace and I look forward to seeing you all at the Handpan Festival in Mèze at the end of June.

Where can we get the album?

You can order it right now from my website. I post out all the albums myself so I can even add a personalised message :)

Do you have an anecdote to share from while you were recording in the studio?

Numéo production did a video shoot of our studio recording. Adrien, one of the two cameramen was only just recovering from the flu and was still coughing quite a lot. After recording a section of 6m30s he started having a coughing fit, almost choking...afterwards he told us that he had wanted to cough right from the start, was doing everything he could to stop himself and even held his breath for almost 2 minutes so as not to not interrupt the filming. Believe it or not, he didn’t cough again after that, not once!

Big love to you my friend, thanks again for everything you do for the community.‍

David: My pleasure! Thanks to you for your beautiful music.

10 reasons to get into looping

Interview with an artist: Tom Vaylo