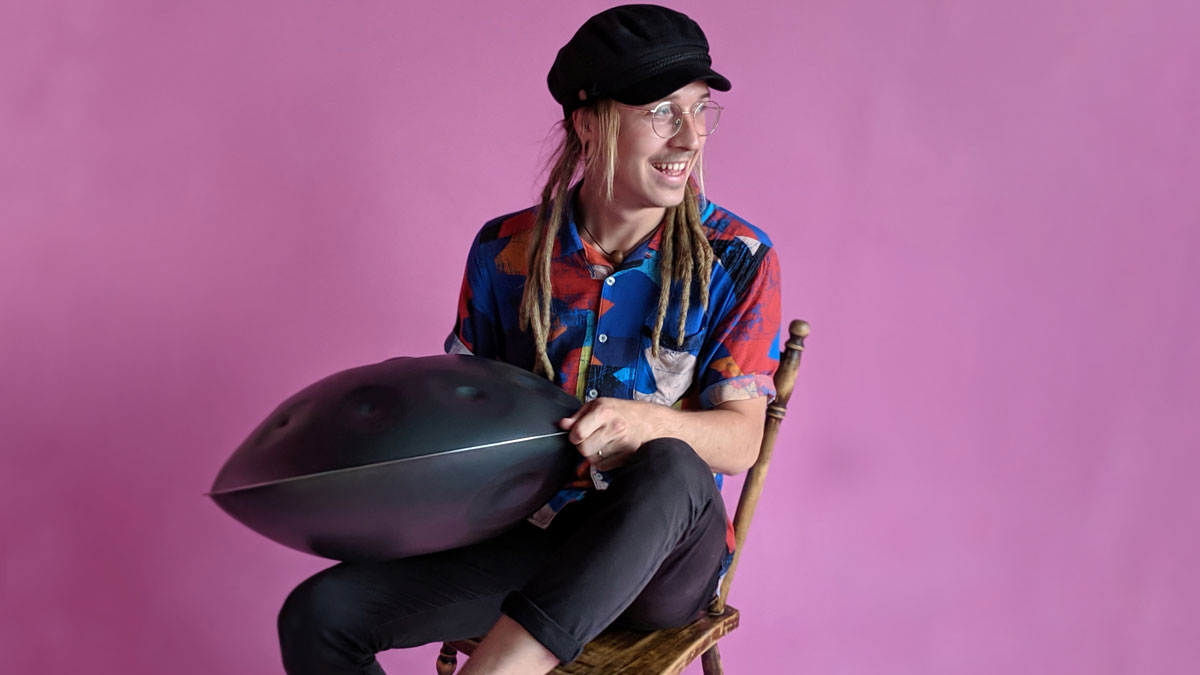 I would like to introduce you to my friend and talented artist, Francis, coming all the way from Quebec... Happy reading!

David : Francis, it's such a joy to have you on MasterTheHandpan. For those who don't know you yet, can you please introduce yourself?

Tell us about yourself

Hola! My name is Francis Leclerc and I’m an independent artist from the Lévis region in Quebec. I work part-time and the rest of my time is devoted to music, either composing or developing new projects.

For the last year or so I have been giving handpan lessons and workshops which helps me get closer to where I want to be, making a career in music. It’s not always easy but I have faith in what I’m aiming to achieve in life.

I believe the key to success is the 3 P’s (Passion, Perseverance and Patience).

How did you discover the handpan?

One morning in 2016 I was surfing the net and came across Yuki Koshimoto’s video of her playing the spacedrum, a true classic, haha!  I became obsessed with the sound and after further research I found out that there was a whole international community based around the handpan and that was it, I was hooked! From the age of 10 I learnt to play the drums but gave up in my late teens.

However, once I discovered the handpan I realised that there had been a void during the years when I was unable to express myself freely like I can through music now.

Can you tell us about the community of handpan players in Quebec?

The handpan community in Quebec is just ‘WOW!’ An amazing mix of colourful characters, amazing people and inspiring players. When we get together for our annual gatherings it’s like a family reunion and our jams around the campfire are the best moments.

I would compare the HPQ community to a paradise island with abundant beauty, but little known to the rest of the world. I would love to record an album with all the different artists from the Quebec community, it’s something I’ve been thinking about for a while as there’s so much talent to showcase here.

Please take a look at our Facebook group ‘Handpans Quebec’ or, even better, come along to one of our gatherings. We have a special treat lined up for our event in autumn 2020...stay tuned!

Your new album “Fragments” is out now, can you describe it for us?

Yes! Wow! What a sense of achievement at having produced an album. I often say that music is not something tangible so, to have been able to make this project a reality is one of my proudest achievements to date. It’s a real milestone, the end of a chapter and the beginning of a new one.

This album is so deeply personal that it took me some time to find the ‘momentum’ to start the journey. Creating and producing music is to make yourself vulnerable, as well as a way to express yourself freely. This experience was so much more than just releasing an album, it’s difficult to put my feelings about it into words.

The idea, or rather the ‘lightbulb moment’ for this project came to me whilst travelling in Asia last winter. During my stay, I attended the first ever PanSiam festival in Thailand and was lucky enough to perform in the post-festival concert where I got the chance to meet some truly inspiring players who have since become good friends.

Being so closely a part of the handpan world alongside so many devoted and passionate people really made me aware of the importance of our actions and decisions which, although they often seem insignificant at the time, actually lead us along a particular path in life.

It was as I was leaving Thailand to go to Sri Lanka that “Fragments” came to mind. This album expresses each meeting, experience and emotion lived. They are fragments of energy which ricochet in the universe and come back to me in the form of inspiration.

What instruments are on the album?

I must first thank each maker who has put their heart and soul into creating instruments that, for me, are just magical. Without you, there would be no magic.

There are also two collaborations with some very talented musicians: “Mirage” with Sonia Joannette on harp and “Sidéral” with Michel Ducharme on native american flute.

What is your favourite track from the album and why?

Good question! Each composition is unique and carries its own message. If I go with my gut instinct I would say “Fragments”. This piece came to me out of nowhere one evening alone at home. The melodies started to flow as I played my handpan and I felt at one with what I was playing, as though I had already played these melodies before. Sometimes I spend several hours or even days working on a single piece, but this time it was different. In my opinion “Fragments” describes perfectly the concept of the album.

Do you have a particular method for composing?

With an instrument such as the handpan it’s easy to let yourself go and find inspiration. It’s entirely different to be able to compose in a more ‘structured’ way. Like the idea for “Fragments”, I find inspiration as I go through life. Life evolves day by day and my music follows this evolution.

I also like to visualise images a bit like in a fantasy world. The track “Equilibrium” expresses the duality of being in the present moment whilst confronting the past and the future. The inspiration came to me by imagining a tightrope walker walking across the cable and keeping their balance so as not to fall.

In this image the cable represents the present and each side as the past and the future respectively. Sometimes I simply decide to express emotions through music and so I let myself be guided by intuition and the melodies I create.

At MasterTheHandpan we like a good bit of kit 😀 What did you use to record your album?

What are your future plans?

I played my last concert of 2019 in Quebec in December and now I’m going away for 4 months to South Africa and Asia to get some fresh inspiration for my next album. There will be some new and exciting things coming up in 2020 (concerts, workshops and musical retreats) as well as some other surprises!

Where can we get your album?

On Bandcamp or from me in Quebec or elsewhere on my travels!

Do you have an anecdote from in the studio or at a concert?

During the recording of the album, there were so many microphones around me (including some super-sensitive mics to capture the subtleties of the instrument), that you could even hear my stomach gurgling, so we had to do a retake. I think that for a sound engineer, it's a challenge in itself to record handpan.

If you were on a desert island and you could only have one scale, which would it be?

Hmmmmm! I would say F Low Pygmy. It’s with this scale that I’m able to dive into my own world so easily. Its minor and major intervals constantly transports us between two different realms. This pentatonic scale can be used for more introspective or even meditative playing but without limiting compositional possibilities like some scales of the same genre. It is a complete scale, soft, deep and brilliant. “Métamorphose” and “On & Hon” are played on this scale.
‍

David : Congratulations my friend for this amazing album, and thank you for your contribution to our handpan community.