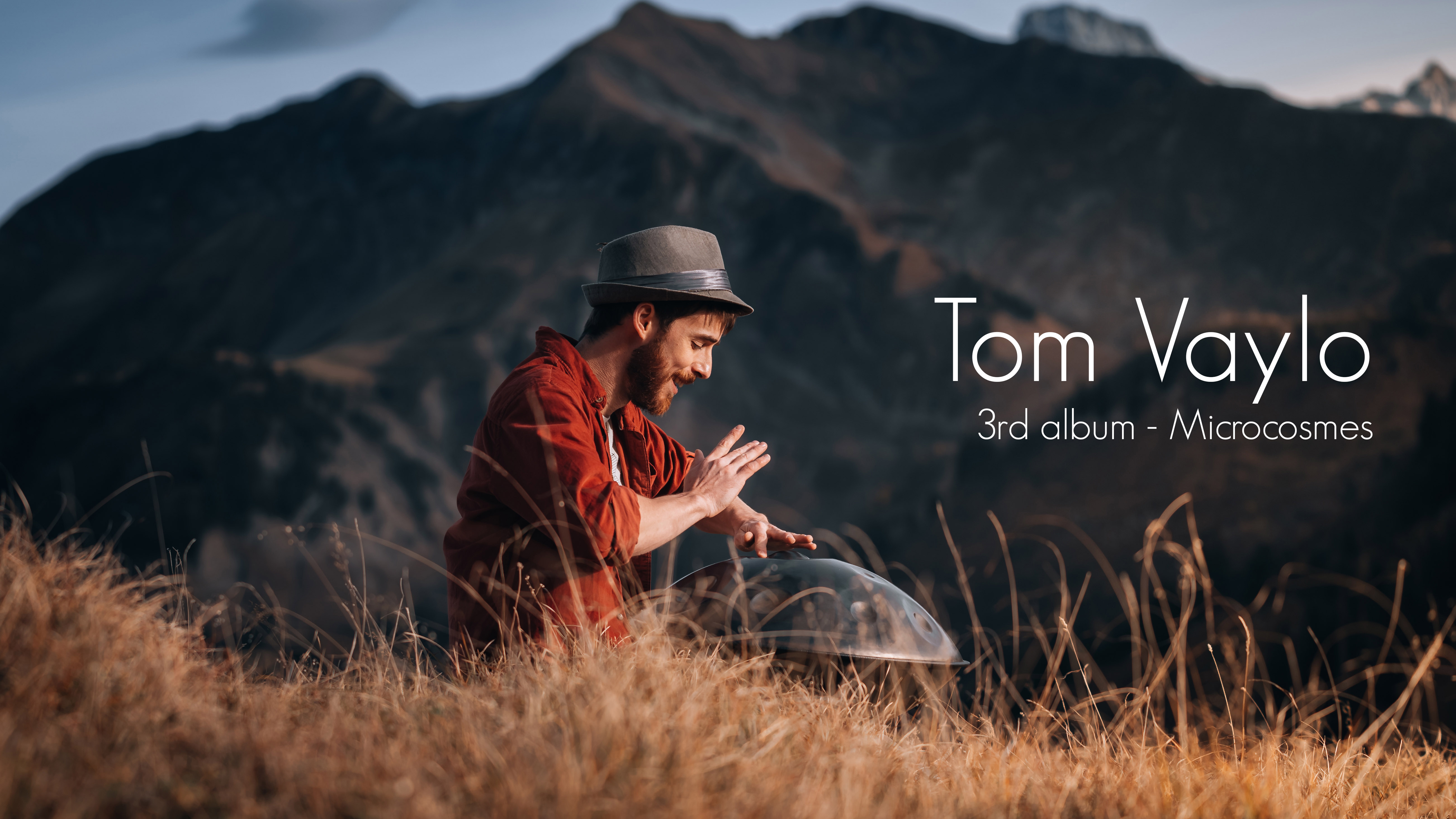 Today’s guest is Tom Vaylo. A musician who artfully blends acoustic and electronic music to take us on an incredible musical voyage of discovery. Sit back and enjoy my interview with him!

So bro, could you please introduce yourself?

I’m Tom, handpan and guitar player, and an electronic music producer. A few years back, I started the “Handpan Electronics” project. I compose varied and rich tracks by combining the power of electronic music and authenticity of acoustic instruments. The focus is on composition, trying to fit every instrument in its rightful place in interesting songs that are different than anything you’ve heard before. And I love it!

How did you end up playing the handpan? What’s your story?

Well, I’ve been a musician (and instrument lover) from a very young age. When the hang was first created, I was about 18 years-old and already played flute, saxophone and guitar. I randomly ran into a hang player in a quiet harbour, and he invited me to try to play. It was like magic - I guess most of you know that feeling. But then came a few years of struggling to get one – I guess most of you know that feeling too – and I got into electronic music. But I finally did get one.  And one day, when I was about to play a guitar duo concert, my mate couldn’t make it, and I ended up alone on stage for the first time. I decided to have fun with my recent home experiments mixing handpan and electronic music. And the magic happened again - people loved it, and above all, I really had fun and discovered a super powerful way for me to convey emotions and stories!

If you were lost on a desert island with only one scale, which one would it be?

Come on, one scale? I guess I’d take some hammers and metal sheets and spend most of my time figuring out how to make more. 😊 I mean, if I was lost on an island, I would probably have plenty of time to experiment!

What handpan are you currently playing?

My main instruments are a Yishama F Low Pygmy, an ‘Instrument de l’Elf’ prototype (extended F# Hijaz), and a custom Em/G Godan. I have a few others that I play, including a Tympan E Aeolian 12 that I won’t be playing for long as one of you might win it soon (checkout my giveaway)!

Wait, you mean one of our MasterTheHandpan readers could win a handpan?

That’s right. 😊 I am currently releasing my 3rd album, which is called “Microcosmes”, and to cover the expenses of producing it professionally, I am running a crowdfunding campaign with a raffle. So besides getting the album, one of the backers will win a 12 note handpan by the French maker Tympan!

Could you describe the brand new album you are currently releasing? Atmosphere, influences, other instruments, featuring…?

This 3rd album, “Microcosmes”, follows my musical explorations through handpan, electronic music and other instruments.

It is made up of 3 parts - 3 microcosms - each unveiling a different musical universe. I had the chance to collaborate with talented guest musicians (flute, saxophone, violin, oud) who brilliantly inspired me to create a super diverse album.

And above all, I wanted it to be a physically unique and interesting object.

So, rather than releasing a classic CD edition, I wanted to transform it and create an experience balanced between the physical and digital world: phygital illustrations. These illustrations were designed to combine back visuals and sound in a meaningful object. In the end, the box will contain 3 illustrations hand drawn by Thibault "Elips", printed on thick matte 12x12cm paper. Each of these phygital cards depicts a microcosm, and creates a link between the physical and digital world with a QR code on the back giving you access to the related song on all your devices.

Where can we buy your album? How can we support it?

You can pre-order the album here, and also get some special perks by supporting the project (my new course on MasterTheHandpan, raffle tickets, art prints…). By doing so you will enable me to cover the costs of releasing the album!

How do you compose? Do you have any methods or ideas to share with us?

I really think it’s about having fun. It’s amazing how doing things differently every time and throwing in a bit of randomness instantly creates new paths and plants new ideas in our heads.

I may have as many composing methods as tracks, but I have an interesting one I could share with you here. You probably know that your playing is heavily influenced by the playability of your instruments. Note placements, sides, and so on, will create habits and affect the melodies you play, ultimately pushing you to often play similar patterns. To get a fresh new perspective, I sometimes like to compose handpan melodies on a midi keyboard or on a different instrument such as the guitar. This way, you’re not influenced anymore by your note placement, patterns and habits! Or at least, you’re influenced differently. 😉 Then when you find the right melody, just take your handpan back, find the notes and try to play it. You’ll discover that it can really help you to compose more varied melodies. 😊

Which track is your favorite one and why?

Well, I love them all obviously (or they’d still be stored in some dusty old folder), but I have to say I have a special connexion with “Thick Fog”. It started as a challenge for me to tackle a pretty different style – “dancing” Dub – and including my personal references and handpan lead. It turned out to be super fun to explore and play.

I’d also give a special mention to “Fallin Rocks” inspired by Kino Doscun’s amazing Oud and Lavta playing, and “Cumulonimbus” which turned out to be a totally different track than expected when collaborating with Clara Bourdeix’s high level violin playing and Loïc Delaforge’s saxophone!

We are also all interested in your handpan recording equipment. Would you mind sharing it with us?

Unlike what you may think, I’m actually not a gear-crazy person :D My setup is quite minimal and efficient. I record the handpans with Neumann’s KM184 plugged into an Antelope sound card. I also use a large diaphragm mic (antelope edge solo) for some handpans or other instruments. Then I use a few controllers (Push 2 for ableton, launchpad and launch control) and a Roland midi keyboard. And that’s it.😊

What book is on your bedside table right now?

You can also learn Music Production for Handpan with me on MasterTheHandpan.

Interview with an artist: Quentin Kayser