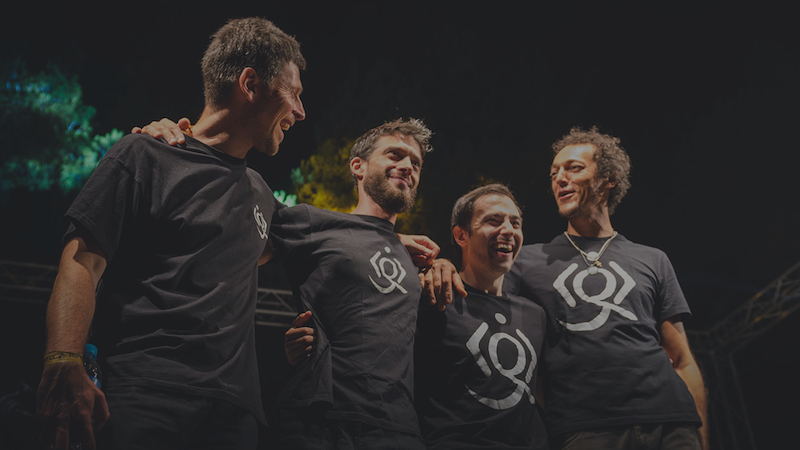 Hello everyone! Today, I have the pleasure of giving you this interview of the talented – or should I say – the amazing! group OLOJi. It’s so cool to see friends making good music together! Alright, here we go…

Hey guys, could you introduce yourselves?

Laurent: Hello! I fell in love with music at a very young age, and I started out by learning piano at the same time that I was learning to read at school. Then I broadened my range by learning several percussion instruments. In parallel with my academic studies, I had a rich journey, learning music from different continents and styles. This experience led me to release my first solo album called Unlimited.

Alexandre: Hello everyone! I was born in a family of musicians. Early in life, I was thrown into the world of music, following my dad’s Ball Orchestra. I began learning piano when I was 6 and continued until I was 18. I played classical, jazz, and contemporary music. I was drawn to the world of audio when I was 14 and started heading towards sound technician jobs.

Julien: Hey friends! I’m a multi-instrument player, composer and wind instrument maker. I studied and perfected my art throughout India, Turkey and Iran.

Othello: Hi, I’m Othello! When I was 13, I came across the didgeridoo and the Australian Aboriginal culture. I was in awe of their traditional music and their connection to nature, as well as the wisdom that those age-old peoples have. Then came jazz and music from all over the world, that inspired me to go and meet musicians who were interested in a fusion of their art with the didgeridoo – oboists, percussionists, violinists, guitarists, oud players, etc. In 2013, I decided to start making my first album, En Mémoire des Géants (In Memory of the Giants).

How was the group OLOJi formed?

Laurent: I met Othello, and that led to everyone else meeting each other. At the time, I was looking for a didgeridoo player for the second album I was recording with a group I was playing with back then, called Mayaëlo.

Othello: Julien was part of the team for my album called En mémoire des géants (In Memory of the Giants), and we had a few concerts planned. Several musicians from the recordings weren’t available anymore, so I had to change my plan. After meeting Laurent, I offered him to come play with us for some tracks from the album. What was bound to happen ended up happening – this encounter led to us composing new music. The “Othello Ravez Trio” became “OLOJi” and performed for the first time at the “Rêve de l’Aborigène” (The Aboriginal’s Dream) festival.

Laurent: Then I asked Alexandre, a young musician and talented sound technician to join us, so he could make our music sound good. After an EP, a first album, Osni, and a two-album box designed for meditation, he joined us on stage playing keys, starting a new chapter.

OLOJi – how did you come up with that name?

It’s a combination of the first syllables of our names. Ji comes from India and is a mark of friendship and respect that you give someone.

Tell us about your new album!

There are now four on stage since Alexandre Chaigne joined us on the keys. Before that, he was our arranger and sound technician.

Because there are four of us now, we’ve been able to really expand our creative range in this new album. It’s a mix of contemporary and roots.

Our objective was to create musique that sounded more like pop, more open and easy to dance to, compared to our previous albums, Orion and Osni, which were composed with more complex rhythms.

What instruments are used in this album?

What is your favorite track from this album and why?

Laurent: “Gearing” is one of my favorite tracks. I think it really represents where the group is at right now: it’s an interstellar voyage that sounds like our first EP, Orion, but more mature, I think. It’s a mix of tension and relaxing that we played around with. The idea is to create a chain reaction, to stir up certain feelings in the listener. The song sounds both urban and contemporary, with kind and transparent notes. It has both a roots and a raw sound to it, especially in a more tense and rhythmically complex part.

Julien: “Crystal Drop.” I love playing it and it was partially composed in a cabin in the middle of Brocéliande forest.

Othello: “Gearing” is one of my favorite pieces. Its pop dimension gives it more of an open feel. I love playing it on the didgeridoo. It helped me rethink my presence in the songs and to be more plain, simple and original. I included the first trumpets of the didgeridoos as harmonies. In the same way, I really like “Chase” for its dynamic. On that track, I use more traditional didgeridoo techniques, like the yidaki, which comes from the Australian Aboriginals living in Arhem Land.

Where can we find this album?

I always like to ask musicians for stories from studio sessions or concerts. It’s your turn!

Oh man… we would have a lot of stories – here are a few!

You can watch the bloopers from the recording of our first album, Osni, it’s worth it:

David: Great! Thanks guys, it’s great to get to know you a little better. Thanks for your time, your talent and your passion for music!

Dear readers, I hope that you enjoyed this interview and that their latest album will take you places you’ve never seen. Have you heard the album yet or seen the group live? How was it?

On my end, I’ll see you later for another interview. On that subject, which artist would you like to see on the MasterTheHandpan blog?

Interview with an artist: Quentin Kayser