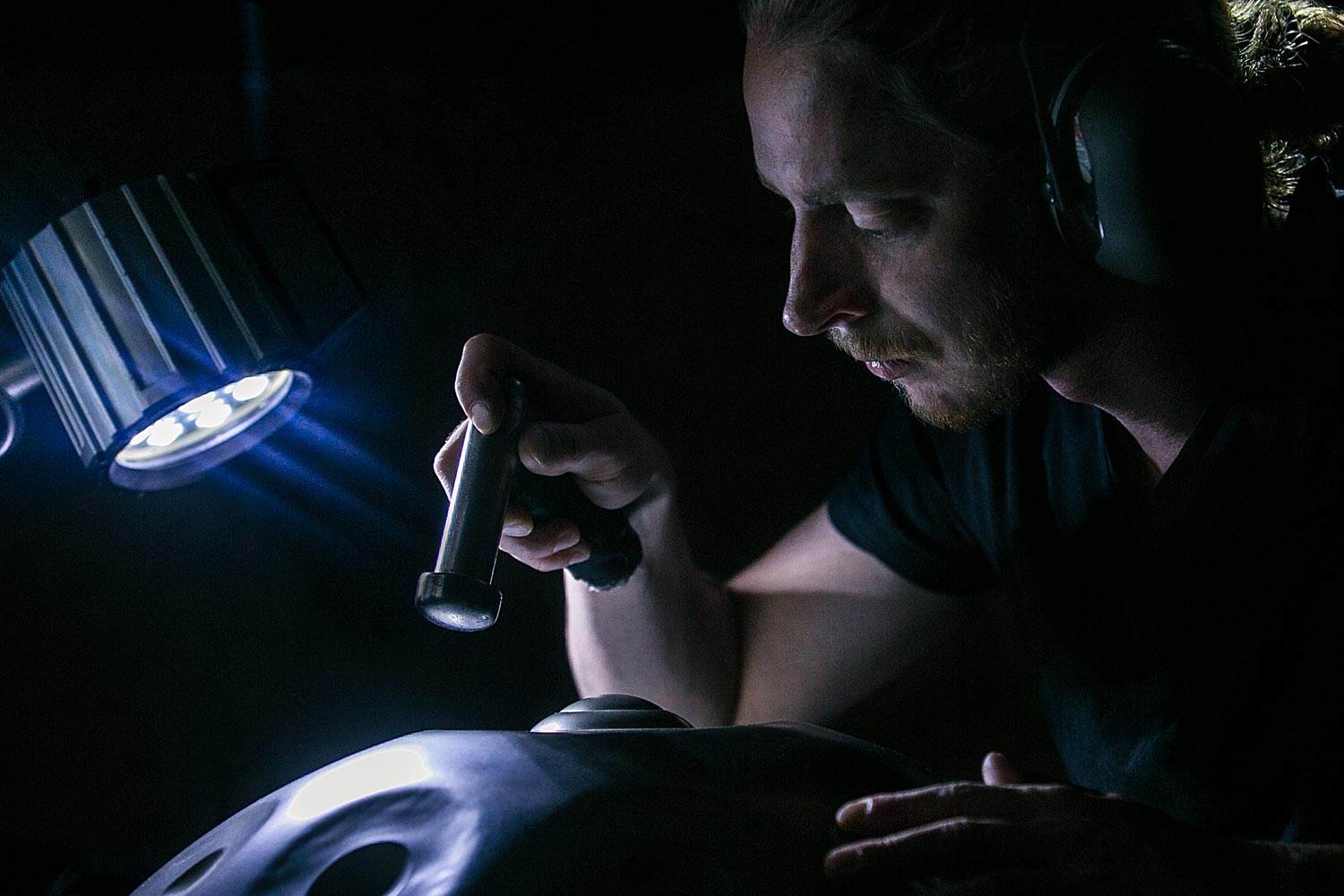 Today we are starting a blog post series that will make you discover the makers that are crafting with so much dedication our precious handpans. Let’s dive into their world!

Let’s meet Ralf van den Bor. Not only is he a very good friend of mine but also his handpans called Ayasa are truly amazing! I am using them a lot on stage in my set. I love their warm timber, balance, precision, overtones and sustain. We have here in my opinion very high quality handpans.

After trying a few studies and being in different working environments, I started making handpans about 4 years ago. At the time I was playing handpan for almost a year.

I live in the center of the Netherlands, very close to the workshop in a place called Baarn. My main passion is still the handpan: building them, innovating the building process and as important, playing them! Besides playing the Handpan, I started learning how to play the piano, keyboard and a few different percussion instruments. Other passions are traveling, (eastern) philosophy and self-development.

What decided you to start building handpans?

Having never played any musical instrument before, the yearning to start to express through music became bigger and bigger in the year 2012. After my best friend Rick (now co-worker at Ayasa) showed me a video of the Handpan, I was hooked! It didn’t take long until I had my first instrument and I started playing in December 2012. In the year 2013, I visited my first handpan gatherings, quit my job and studies and built my first fully tuned instrument at the end of that year.

How did you find the name of your instrument, why did you call it that way? What’s the story behind it?

The search for a name was a long journey for me! It was something that I knew would probably be attached to me for a big part of my life. And so I decided to wait until I found the right name that I would feel connected with. Being inspired by eastern philosophy, I was looking for a Sanskrit word describing exactly what for me the instrument really is. I found that “Ayasa” means Iron in Sanskrit. It resonated with me as iron is the main source material of steel and thus of the instrument.

What do you like the most about handpan? about our community?

The possibilities it can give for expression. I see the instrument as a tool, it is there to say something, to express something to someone, to no-one or to oneself. As well as the possibility to have a dialogue with someone when playing together! Any emotions that are inside of me, are waiting to be expressed through the handpan. To be able to create instruments for others and give them these possibilities is something truly amazing!

The handpan community is something very special to me. There are so many heartwarming people who play the instrument, they are my kind of people. I made some really good friends within the community and shared many good times at many gatherings, festivals and other places over the last few years.

What do you like the most about making instruments?

That all the energy you put in the instrument has an effect on the outcome! Tuning while not being in the best mood for example, is not the best idea. It asks you to be grounded and to be in the here and now, which is a state of mind I am trying to be in at all times. Making these instruments has taught me a lot of life lessons and continues to do so. We are so early in the making of these instruments that there are always new processes, skills and innovations to be discovered and developed. There’s no end to it, we can always grow further.

What are the values you are putting into your work?

My goal is to create instruments that people will connect with and rather stay with them for a lifetime. In order to create that, I think the most important quality is consistency: to be able to recreate my definition of sound over and over again so that people know what the particular sound is of an Ayasa. My definition of sound are the particular sound qualities I searched for ever since I started to learn how to make these instruments. With that I hope to attract people that have the same definition sound as I do, and connect with people that are at a similar wavelength.

Tell us about your most recent creation, what’s so special about it?

A bit more than year ago I met the Brazillian handpan player, and now a good friend of mine, Alexandre Lora at the Griasdi Handpan Festival 2016 in Austria. He asked me if I could make him an instrument. This year two months before the festival the instrument manifested, and I played it every single day until I passed it on to Alexandre! It is a D Harmonic minor with nine notes on top and five on the bottom, with a super nice layout, thought out by Alexandre. The connection I had with this instrument was the most special connection I’ve had with an instrument since a while. The sadness of letting it go at this year’s Griasdi Festival disappeared instantly after Alexandre played it for the first time. The sadness actually transformed into pure bliss! To see an amazing player and human being instantly connecting with the instrument and creating beautiful music through it is simply beautiful. That combined that with the gratefulness that he showed me, is something very special. For me it is the best part of my work. So I would say the connection with the player is what made the instrument special and what makes every instrument, that is being nurtured, special.

An anecdote/funny story related to handpan?

The glue used by most makers is Merbenit HS60, I have been using this since the very start of making Ayasa’s. Gluing can be a messy job! Sometimes there’s glue on your hands and arms after gluing an instrument, and it is not easy to remove (imagine the black sticky stuff that a dinosaur spits in the face of the guy in the first Jurassic Park film). At some point Marius, who was working with me from 2015 to early 2017, was convinced that the glue caused impotence! He told me it was in the safety description of Merbenit. It scared me a little bit and made Marius, my twin brother Roy and me weary of gluing instruments. Much later Rick was talking to Jan Borren about it, and Jan started laughing out loud! Turned out, Jan told Marius that it was causing impotence as a joke!

Would you share a tip/advice for someone who wanna start making handpans?

Be sure you want this! Patience and dedication is what will get you there. If handpans are not your main passion in your life, I think you can better forget about it.

Everything you need to know about Ember Steel Handpans

Interview with a maker : Meridian handpans

Interview with a Handpan maker : SARAZ