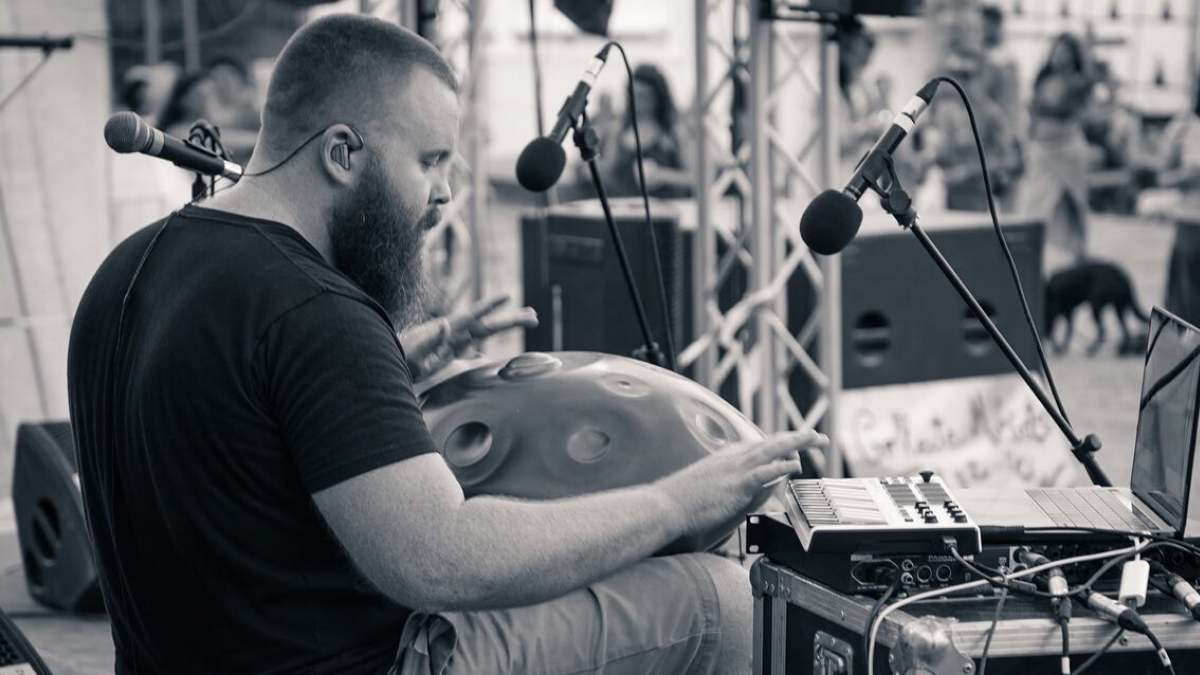 Today, my friend and talented handpan player Dan Mulqueen has some news for you. Pssst, we’re also talking about free handpans!

Hey Bro! So exciting to hear about your new album “Real Life!” Tell us more about it!

Yes! Man, it’s finally finished. "Real Life" is coming out on March 1st and I’m super happy with how everything came out. This release has a little bit of everything on it…some songs totally handpan only, some songs very simple arrangements, and some songs with really hip-hop/electronic inspired songs.

We’re going to get into more specifics in a minute…but first…you’re giving away 5 HANDPANS?!

Yeah this is crazy, haha! You can see everything Here, but to celebrate the album and drive some awareness to it, I thought it would be super fun to team up with some of my good friends and sponsors to offer 5 instruments in a raffle…these 5 instruments are from Symphonic Steel, Ayasa Handpans, Veritas Handpans, Elaia Handpans, and Makai Handpans.

The way it’s working is that for $20 you have a raffle entry to one of the lotteries (you can enter as many times into one or into how ever many you want), and a digital download of my album. $10 of that goes to me for the album, and the other $10 goes to the builder for their involvement in this whole thing. You can click around the page to find out some of the specifics on which instruments are being offered, but at a glance, there is a stainless steel Ayasa Handpan, 7 options from Veritas, and any standard production scale from Symphonic Steel, Makai, and Elaia Handpans.

But yeah, most importantly, you can win your own handpan for only $20…I think that’s pretty crazy. Here’s the link: http://bit.ly/RealLifeAlbum

That's so cool! But back to the album. How is this album different from the last one?

With “Real Life,” I really tried to have the songs make more sense together. Meaning there are some underlying themes in production and structure that make the album more cohesive as a whole project. I was really happy with my last album, "Handwriting", but after listening to it as the months went by, I feel as though I could have done a better job of tying the songs together…so I learned from my mistakes and really tried to make this album make sense from start to finish.

With this album, I wanted to make each song strong as a stand-alone track, but also have all the tracks make sense in a specific order to give the album a better overall feel. All that being said, I don’t think the songs are too similar and there is still a variety between the tracks, some totally acoustic, some minimal production, some really REALLY electronic and produced. I had a blast putting this one together!

How long did all this take to put together?

I guess the handpan compositions started just about 2 years ago…maybe a year and a half. So I took a lot of time working through the handpan solo compositions, then maybe a year ago started adding some of the electronic production ideas with some of them. Then the last 6 months was very VERY production intense…meaning all the “album takes” for recording, re-working a lot of the electronic elements, mixing, mastering and arranging the album to take the listener on ride through all the songs!

Tell us about the recording process…

So this is my fourth studio album, and from the beginning I’ve done everything myself. The recording process is very solitary and usually happens at odd hours. The best times to record for me are between 12:00am - 6:00am to make sure there is absolutely zero outside noise to interrupt the recordings. So basically becoming nocturnal for 2 or 3 months to record the live handpans and some cymbals and other samples.

Overall, the process was a blast! Kind of exhausting at times, but overall it was really fun and I feel more confident in both the handpan compositions and electronic production on this album than anything else I’ve done.

What are your favorite songs?

That’s always a tough question because I spent SO much time with the songs. But the first single “Detour” is really fun for me to play and the production on it was really fun. There’s another song called “Bloodline” that has a lot of really cool handpan parts and the production is pretty simple…just upright bass and some extra marimba hits. This was really fun because there’s no external drums, so it was a really fun challenge to highlight the handpan in both the percussive and melodic way.

OH! There’s a song called “Shadows” that I’ve played live a few times that is just really fun…it's got some dance elements in the middle, DEEP phat bass, half time breaks, and a really cool glitch-hop inspired break…yeah that one is fun. It took a long time to produce the electronics because it's a bit more advanced than the stuff I’ve made in the past, but it was really fun. I don’t know…they’re all my favorite in different ways!

Any funny ways to take your mind off the album production this time?

Yes. As I said before, this process for me is very solitary, so I’m kind of forced to wear a lot of different hats. First and foremost, I have to be the creative who creates and produces all the music, the boss to enforce all of my own deadlines, the graphic designer to do all the imaging, the web developer to update all of my social media and website stuff, and the cheerleader with the pom poms to push myself to keep going along the way…it's exhausting!

With the last album, I became OBSESSED with kung-fu movies. I’ve always enjoyed them before the album process, but during it, every time I would need a break or eat a meal, I would watch a different kung fu movie. To the point where I had favorite actors and ones that I couldn’t stand.

With this album, I became pretty obsessed with these YouTube channel called “Primitive Survival” and “Jungle Survival” where these dudes would make swimming pools and houses and all these different things in the middle of the forest out of mud and clay and stuff…no idea why, but it just made me relax and get out of my own head for a few minutes. Weird! haha!

There is lots going on this year for me!

Obviously, the big thing is the album in March followed by an east coast US tour for the month of March. Then in April, I'll be out in California for a few weeks for some shows. June, I’ll be in Japan for the Tokyo Handpan Gathering. I’m working on getting back to Europe at least once…maybe at the end of August/early September.

Outside of touring, I’ll be releasing an acoustic/remix version of “Real Life” some point later in the year. Also releasing an EP with a certain French dude that I play in a duo with… (David: this must be me I guess?!)

But keeping all options open and having as much fun as I can along the way!
‍

David: Thanks Bro for this amazing news and as always thank you do so much for the handpan community, I’m sure your new album will be a great success! Best of luck to everyone entering the raffle!

Interview with an artist: Tom Vaylo